Stealing Fire explores the Greek mythology of Prometheus through aerial and...

Lucia Aerial Performing Arts Company will present its Student and Apprentice Division’s show STEALING FIRE on May 11th and 12th at 7:30 PM and May 13th at 2:30 PM at the H & R Block City Stage Theater at Union Station.

Stealing Fire explores the Greek mythology of Prometheus through aerial and acrobatic arts. It follows Prometheus as she battles titans, creates mankind, and, of course, steals fire from the gods. Other familiar legends populate the show, such as Atlas, Hercules, and Pandora as their stories weave together around the protagonist through dynamic aerial dance. 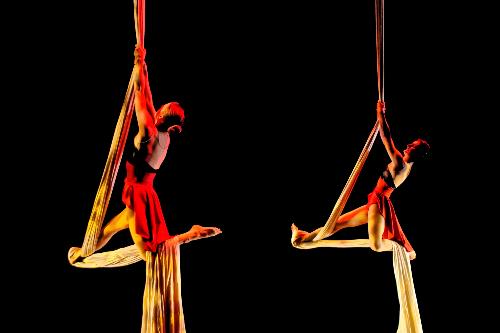 Aside from the obvious addition of aerial silks and trapezes, Stealing Fire modernizes the well-known Greek mythology by ignoring traditional genders. The leading character, Prometheus, is now female along with her sister Epimetheus, while Athena is now the god of wisdom and military victory. Furthermore, Stealing Fire dares to humanize the immortal, as evident in pieces such as “The Weight of the World” where Atlas struggles to accept her entrapment and “Prometheus & Io” where two victims of Zeus’s anger find solace in an exchange of mournful tales. Hercules is arrogant, Hope is fearful, Prometheus is sympathetic. The story outline is the same, but the characters are more complex.  Written by Lucia’s Performance Company Program Director, Kelsey Aicher, Stealing Fire promises to leave its audience thunderstruck and ablaze with excitement.

Tickets are available by calling the Union Station Box Office at 816-460-2020, online at https:// boxoffice.unionstation.org, or at the Union Station Box Office on the lower level during regular business hours. Address: 30 West Pershing Road, Kansas City, MO  64108.  Tickets are $20 for advanced general admission, $25 for at-the-door general admission and $10 for children 7 & under.

All of the joyful not-to-miss moments this holiday season.

SHOW YOUR LOVE. SHOP SMALL: GIVE YOUR LOVE THIS SMALL BUSINESS SATURDAY

Your Health + Safety is our Top Priority